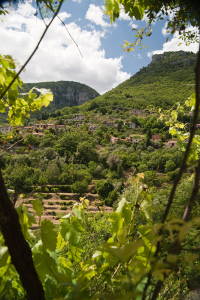 Pont du Loup is an historic little village which was already on the route for travellers touring in the area in the 1800's. Half way between Vence and Grasse it still makes a good base for anyone on holiday in the area, with the possibility of cooking classes at la maison Depollier, and many other attractions within easy reach by car.

It has it’s own confiserie (sweet making factory) and it’s links with the Grasse perfume industry when all the valleys around were planted with orange trees and jasmine. Nearby, the medieval city Tourrettes sur loup, well known for it’s violet cultivation and Festival of Violets, has many artisan workshops; weavers, potters, sculptors.

For people interested in food and cooking the area offers a wealth of interest. There is the tradition of the provençale cooking, the italian influence and modern innovations based on them. The local markets in Antibes, Valbonne and Cagnes sur Mer are a pleasure to explore, discovering the local produce and specialities of, for example, tapenade, socca and pissaladière. There are michelin starred restaurants and simple, cosy brasseries to enjoy. Visits can be made to the various local goats’ cheese makers and olive oil mills.

The villages and towns of Tourrettes sur Loup, Vence, St Paul de Vence, Grasse, Gourdon, and Cabris are twenty minutes away, while the coast is just thirty to forty minutes distant. Nice, Cannes, Menton are all excellent for sightseeing and shopping. There are many museums, amongst them the internationally renowned Fondation Maeght, Matisse, Chagall and Picasso museums. Villeneuve-Loubet is the birth place of Escoffier and there is a museum dedicated to him there.

The social scene is to be found in Cannes, well known for it’s film festival, Juan les Pins and nearby beaches and the jazz festivals in July and August. There are well known golf and tennis tournaments and Monaco, of course, has the Formula 1 grand prix but also its classic car rally. To the east Italy is just an hour away. Hiking and cycling enthusiasts discover the area to hold so much more beyond the busy coast with the most spectacular views of sea and mountains.There are also exceptional gardens to visit, the Villa Noailles and Hanbury, La Mortola to name just two.